And so it goes.

One thing I've realized doing this de-clutter: I have a wildly inaccurate perception of my reviewing capacity. I've pulled out so many items that I purchased (often in multiple shades) with the sole intention of reviewing - and they're still sealed, mocking my intentions with their plastic-coated goodness.

This is the pile of assorted lip products (glosses, stains, lipsticks) that are exiting my collection. I posted it on Instagram and got some lovely comments from people, very encouraging and congratulatory. Which I really appreciated, since I was depressed about how much time and money I've wasted. 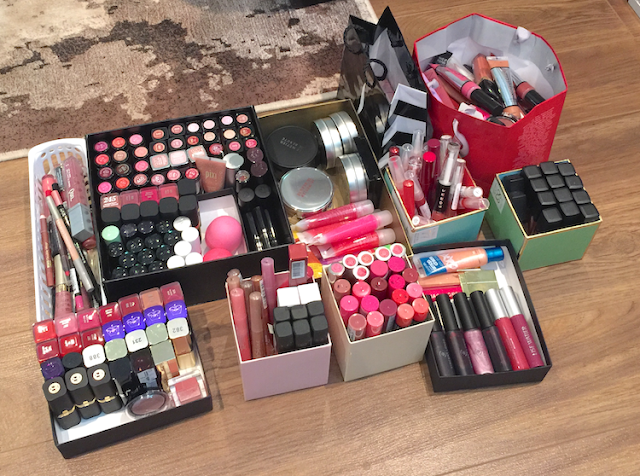 First up - the lip balm and stain drawer. Grouped roughly by cruelty-free (the three trays to the right) and not (pretty much everything else), so when it comes time for Round Two of the decluttering process I can focus on the non-CF side more easily. (That's assuming I don't wind up drinking wine under my desk by the end of this, Sherbatsky-style.)

Side note: those Fresh balms are my favourite, and have been for years, but Fresh is not currently CF. I welcome suggestions for an alternative, since balm is one of those staples that I will have to replace eventually. 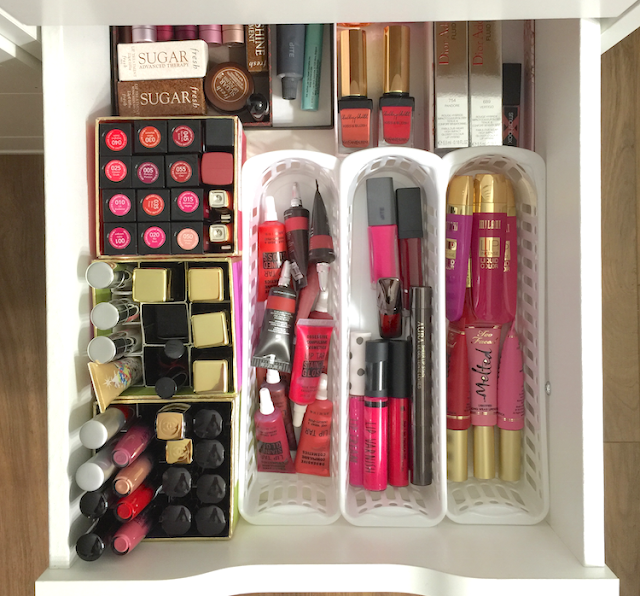 Next up is the lip crayon drawer. I pulled out all the Revlon ones that had yet to be used....and kinda threw in the towel after that. These things are so damn easy to use and carry around. I need moral fortitude to give more of them up. (Again grouped by CF/not CF, with the Revlon/Rimmel and Clinique/MAC being the only non CF ones.) 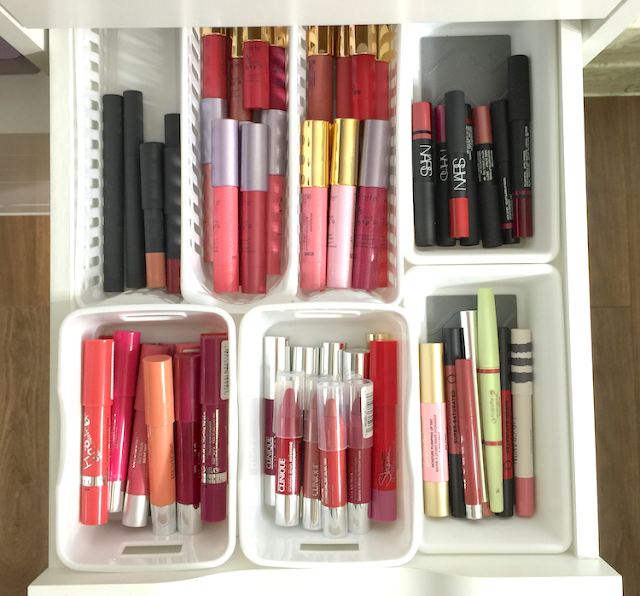 Oh god, the lipgloss. This is some serious goo, here. At least this was easy to parse out. Anything that was still sealed went into the potential sale/giveaway pile. A few things that were open but still new - and that didn't evoke a need to clutch it to my chest protectively - went into the "give it to my mom" pile.

Then there where all the ones that earned a sketchy look during the smell test. Those went into the "toss it" red bag in the picture up top.

And so I'm left with the CF drawer... 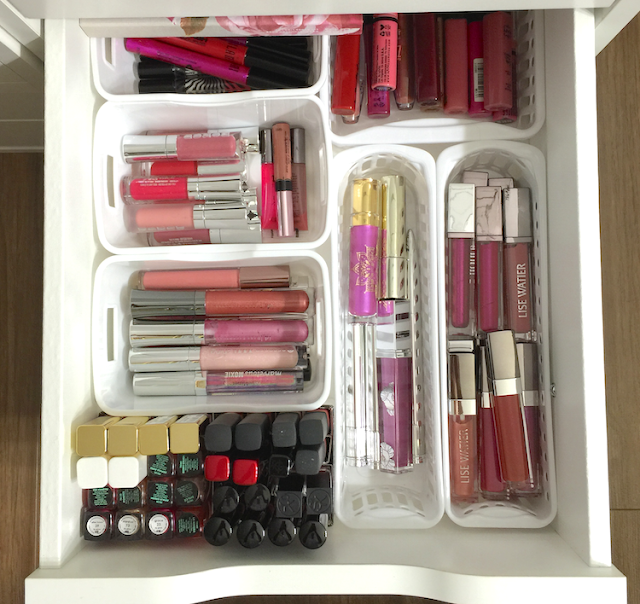 And the non CF drawer. 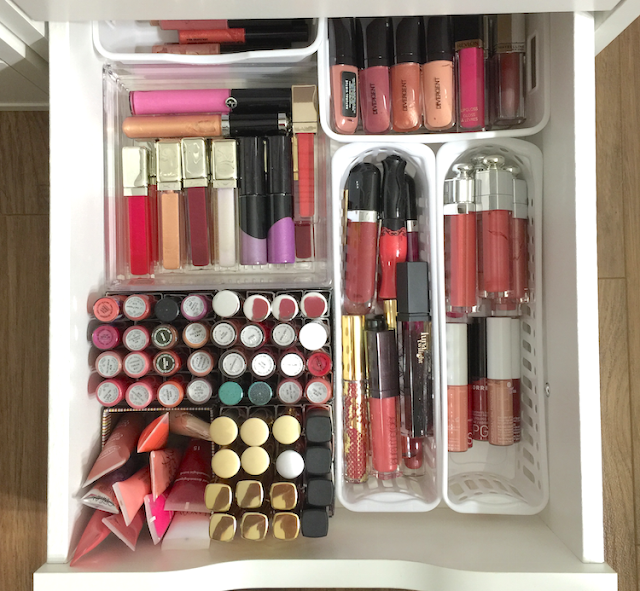 LISTEN, I KNOW. But it only gets worse. Following the same strategy as above... 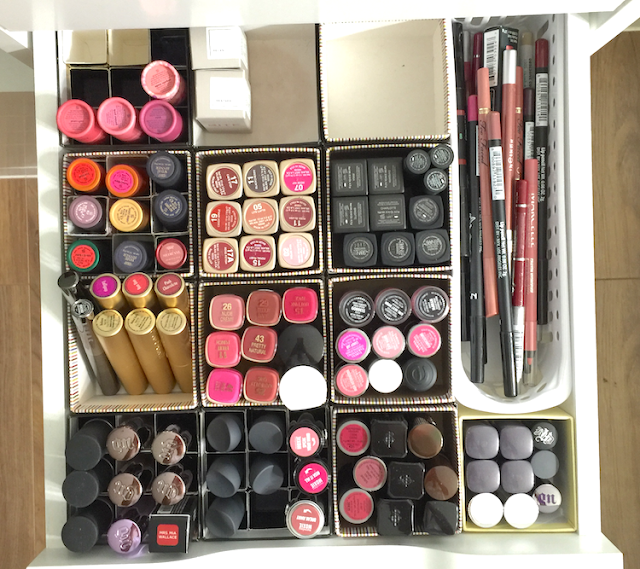 And the non-CF lipsticks.

(And yes, I know the Clinique ones are still boxed. I just bought them before I started this whole thing, and I can't make myself let go of them just yet. Because....reasons.) 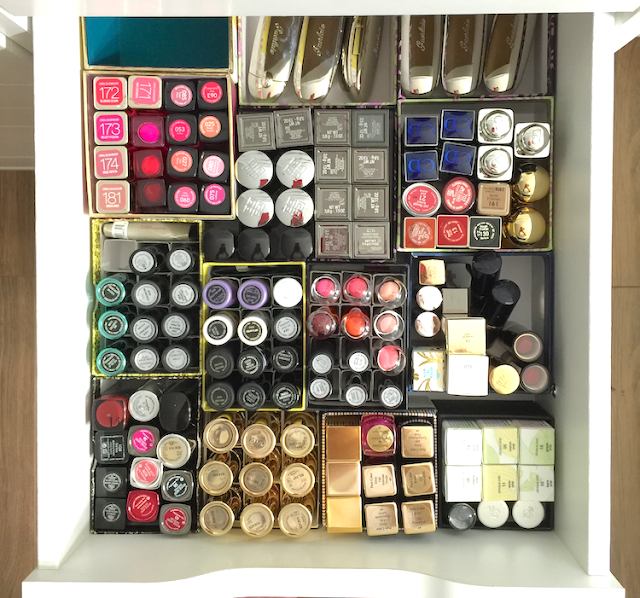 WHY DO I HAVE SO MANY OF YOU?? WHY MUST YOU BE SO ADORABLE IN YOUR LITTLE BULLETS AND PRETTY COLOURS?

Also, is it time for wine?
No comments: