The Sheer Revolution Lipstick (26$ CAD) range from Urban Decay has been out for a little while, but I just recently got to try a few shades: Sheer Ladyflower and Sheer Obsessed. I've been pretty obsessed with either straight up balms or more opaque cream finish lipsticks, so these weren't high up on my radar. I'd heard good things, and I was probably going to snag a few, but I wasn't storming the gates for them.

The more fool I. 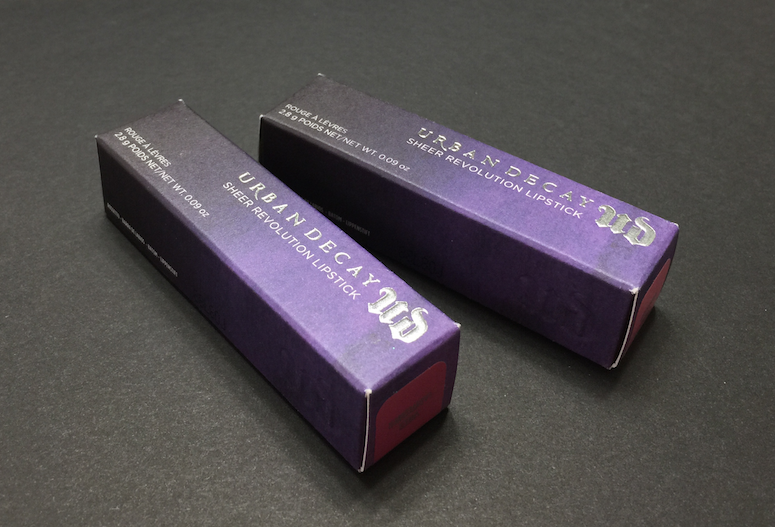 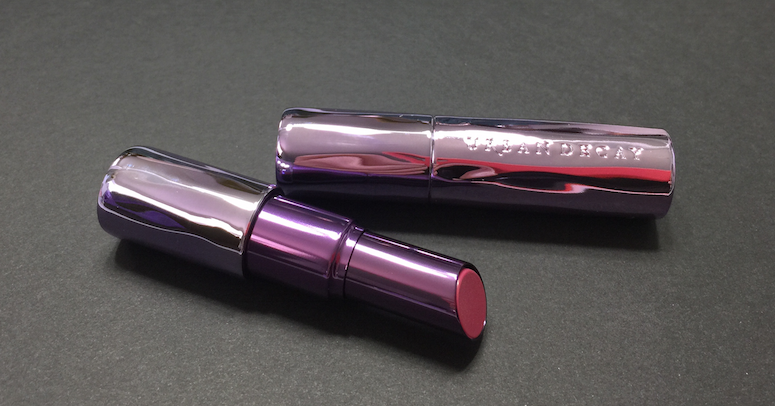 The packaging is similar to the regular Revolution Lipstick, with a fluid and relatively weighty metallic bullet casing, this time in a violet chrome as opposed to pewter.

Unlike the bulky packaging that UD tends towards when it comes to their palettes, this is all sleek and chic, but still totally modern and cool. I feel cool carrying this in my purse. :P

The formula is exactly as the name indicates, a sheerer version of the Revolution lipstick. Where those are creamy, rich and fairly pigmented, these are slicker, lighter and more translucent. In terms of thickness of texture, they fall somewhere between the Estée Lauder Pure Color Envy Shine and the Lancôme Shine Lover lipsticks. They're super comfortable to wear, and though they have that slippy texture, I don't feel like they slide around on the lip. They actually have a bit of drag when applied, which surprised me. It doesn't make them difficult to apply, though, and actually helps keep to the contours of the lip without smearing around.

I wouldn't say they're particularly hydrating, but again, comfortable feeling. They're quite shiny, almost juicy initially, but that settles. Wear time is minimal, however. I don't think I've gone longer than an hour and half without needing a touch up, so be warned that you may be going through that tube pretty fast.

These didn't settle into lines or emphasize dry patches, and had the nice effect of smoothing out the lip slightly, either due to the shine or the more balmy texture.


Sheer Obsessed is described as a candy pink, and it's definitely a light, cool toned pink with a milky/pastel tone. I don't think I would have ever thought to pick up a shade like this, as I would have assumed it would look too light or chalky. I think the translucency keeps it from looking stark. It almost has a bit of a lilac tone to it against my skintone, and it's just an awesome shade for spring.

Sheer Ladyflower (LOVE the name, makes me think of that Medieval-set movie with Michelle Pfeiffer - Ladyhawke?), on the other hand, is exactly the kind of shade I would have picked. It's a cool-toned rosy pink, and again, super flattering.

Have you tried anything from the Revolution range, either the original or the Sheer version? Are there any other sheer type lipsticks that you're currently crushing on?

(Items provided by the brand. This post is not sponsored or otherwise compensated.)