My first experience with primer was the classic Smashbox formula, and it turned me off primers for a loooong time. The thick texture and super slippy silicone texture felt strangely creepy and medical-grade (the product equivalent of Jeremy Irons in Dead Ringers *shudders*). Despite the way it disappeared once applied, my skin somehow still felt smothered. I've found others since then that I do love, and that are much more suited to my needs, but I'm still leery.

I also tried the old Make Up For Ever primers, and while they definitely had a more palatable texture - lotion-like rather than slippy - I can't remember being particularly blown away. I generally love MUFE as a brand, though, so I was hopeful about the recently relaunched version and jumped on the chance to test run a couple. 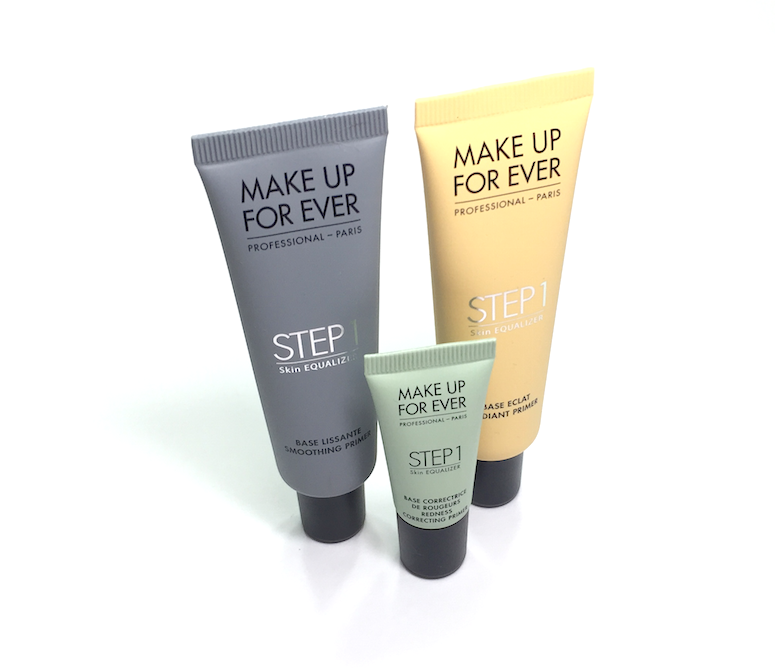 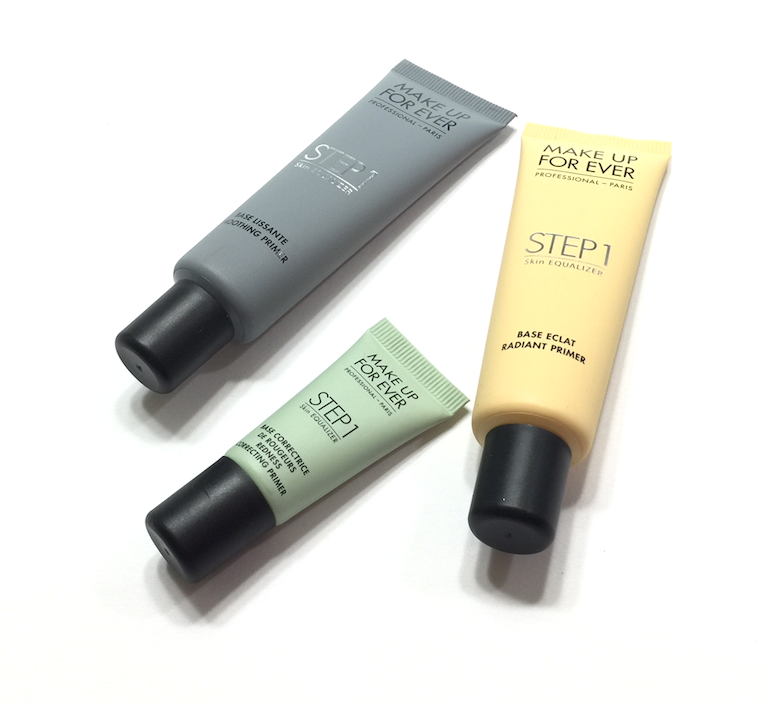 The major advantage and selling point for the Step 1 Skin Equalizer (43$ CAD) series is that the range addresses a variety of needs. Rather than billing one primer as a one-size-fits-all solution, MUFE has ten different options on the table - there's something here, theoretically, for every skin type, texture and tone. Better yet, they can be combined for optimal performance. (They suggest combining the redness correcting or radiance boosting primers before the mattifying or smoothing ones, and the  hydrating and smoothing before the correcting or radiance ones. My skin is a crazy topographical map right now, so I apply what I need in specific areas rather than layering them, but it's all up to you, which is the beauty of this concept.)

I've only tested three - the Redness Correcting Primer, Radiant Primer Yellow, and Smoothing Primer -  so I can't speak to how the texture of each primer varies, but these feel rather similar to each other.

The Radiant Primer Yellow and Redness Correcting have an identical texture: lightweight and a bit creamy, but with that disappears-into-the-skin finish that is the hallmark of a sophisticated silicone formulation. The Smoothing Primer feels a bit thicker, and reminds me of the Benefit Professional - which makes sense, since it needs to have a bit more weight to smooth down those pores and rough edges. It does a similar disappearing act, however, and bypasses that gross, overly slippy feel of the Smashbox type primers.

I would say the colour correcting is fairly subtle. (It's primer, not concealer.) The Redness Correcting does indeed tone down the redness, as does the Radiant Primer Yellow, to some degree. I do prefer the latter, however, as it also boosts the warmth in my skin, whereas the green tinge of the former emphasizes the olive tones. With foundation overtop, it's not a huge deal, and if you really prefer to negate the redness and aren't prone to looking sallow, the Redness Correcting Primer will probably be your pick.

The Smoothing Primer does reduce the appearance of my pores, and helps to minimize the texture of skin around blemishes. It's not quite photoshop, but it definitely helps to create a more even base for my foundation. It also mattifies slightly, though it doesn't control oil much better than any other primer I've tried.

What I especially like about all these primers is how smooth and soft my skin feels after applying them - not tight or flaky, like some primers can leave it feeling. All of them are excellent for getting foundation to apply super evenly, and it nudges up the time-frame for flake-free, shine-free wear.

And since it's hard to talk about the effects of a primer without showing some results, here's the stuff, on my face.

On the left, my bare skin, with some moisturizer that was applied about 45 minutes before the picture. I've been having some kind of skin reaction to skincare samples I was testing (waaaaayyyyy too many at once, hence The Red Spot of Rage).

In the middle, I have the Smoothing Primer applied to my nose, forehead and my inner cheek area. You can see the mattifying effect, and the way the pores are less obvious. The slight texture in my undereye area is also softened. I used the Radiant Primer Yellow on my cheeks, jaw and chin, and some of the redness is attenuated.

On the right, I've applied one layer of foundation (MUFE Mat Velvet, with a tiny drop of Ellis Faas to cut through the matte finish somewhat), with a bit more dabbed over the TRSoR. As you can see, the application is really smooth and even. 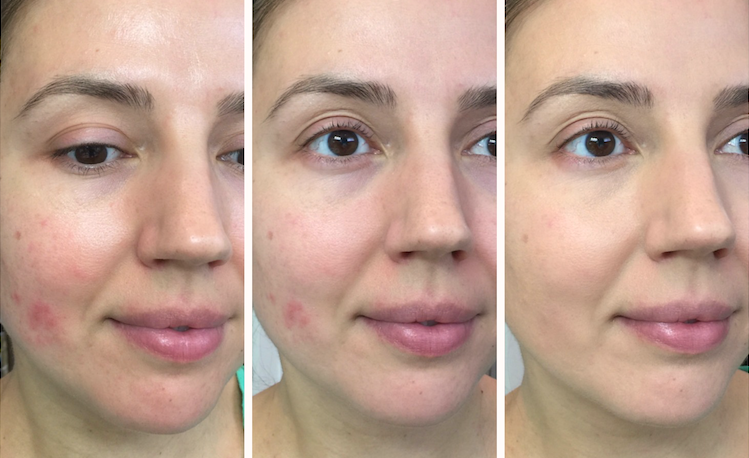 And the full makeup... Are any of you trying these new primers out? What do you think? I'm quite tempted to give the Mattifying and Hydrating ones a go, down the line. In case you're thinking about making a Sephora order soon, you can choose between four deluxe sized samples with the code MUFESKIN (with a 35$ CAD minimum purchase, I believe).

(Items provided by the brand, aside from the GWP sample from a Sephora order. This post is not sponsored or compensated.)

Email ThisBlogThis!Share to TwitterShare to FacebookShare to Pinterest
Labels: colour-correcting primer, face of the day, make up for ever, primer, review, swatches