With Kylie Jenner spawning a thousand 90s neutral lookalike tutorials and the UD Naked on its third iteration, it's about time drugstore brands hopped aboard the "nude" palette trend.

Maybelline is one of the first with their The Nudes palette. 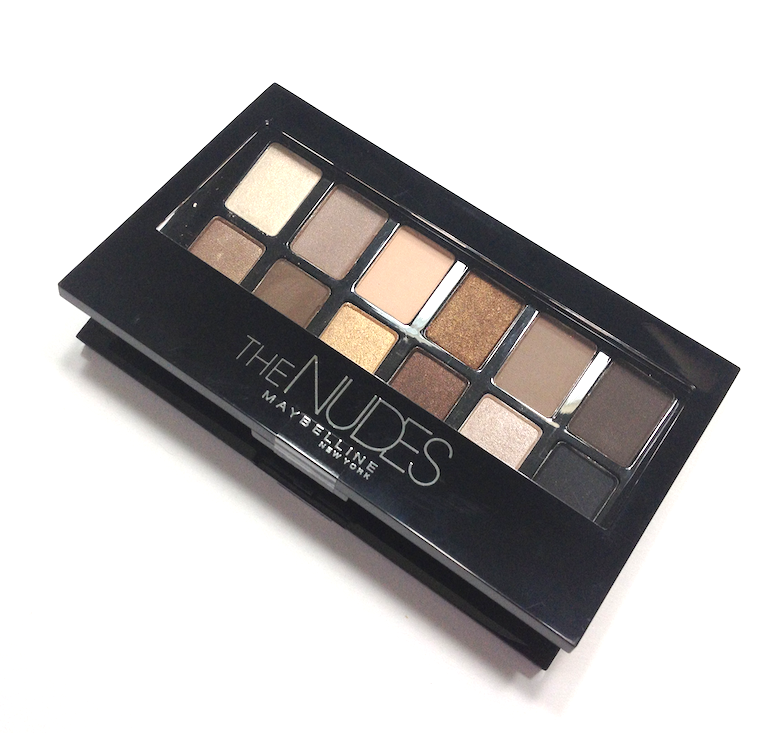 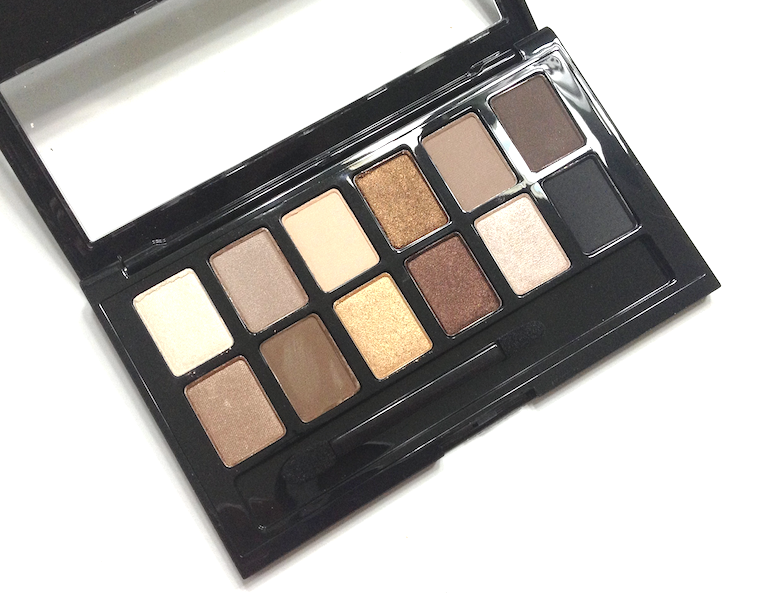 Unfortunately, it doesn't set the bar all that high.

It looks cute and functional enough, with a practical plastic casing and what appears to be a good mix of mattes, satins, shimmers and metallics in shades ranging from light to dark, cool to warm. The layout is theoretically helpful as well, with three full quads laid out across the palette (or six sets of duos, if break them down further). If the formula was top-notch, this could indeed be a great all-around palette - though one point taken off for travel-considerations, due to the lack of mirror.

Formula is exactly where it stumbles: a mixed bag of some shades that have great pigment and creamy blendability, and others with poorer payoff and choppy application.

The best performers are, not surprisingly, the metallics. The middle "quad" is by the best formulated, with the bronze, gold and burgundy brown applying smoothly and with very good payoff. They blend without a hitch, and aren't prone to thinning out. (They're not UD comparable, but I have yet to meet a drugstore shadow that has that degree of intensity. For the standard I'm judging them on, they do very well.) The matte peach shade has softer pigmentation and tends to feel a little chalky, but as a brow bone colour or transition blender it's just fine. This is by far my favourite quad from the palette.

The satins and shimmers are a little behind the metallics, but not terribly so. They vary between having somewhat sheer to decent payoff, and are generally easy to blend, but they can tend to thin out when applied, leading to a soft, muddied look. (Though if you really prefer a next-to-bare eye look, that could work in your favour.) I'm a little puzzled why there are essentially three taupes in here, however, ranging from quite shimmery to almost matte. They look more distinct in the pan, but on the eye, I can barely tell them apart. I wish they had added something that leaned mauve, or a true warm medium brown, both of which would have added some more versatility.

The three matte shades - which are also the darkest - are the most troublesome. They have a dry consistency, and just don't apply or blend very well, creating a choppy appearance both in swatches and when applied. I had the best luck using them to intensify the outer corner of a look, or to add a bit of smokiness, especially overtop the metallics. I hate to say, they're exactly the kind of eyeshadow that gives drugstore eyeshadow a bad rap.

The colour that really stands out is the pale duochrome lustre from the top left corner. I had a hell of time capturing the colour shift, but the picture below is the closest, taken at a weird angle under incandescent light. It looks like a pale, slightly gold-toned cream when looked at straight on in the pan or when swatched, but it actually has this absolutely stunning pink shift at an angle. The texture is nothing to write home about - sort of a crumbly, flaky shimmer, not unlike MAC lustres - but the colour is lovely, either by itself as an inner corner highlight, or dabbed lightly over another shade. 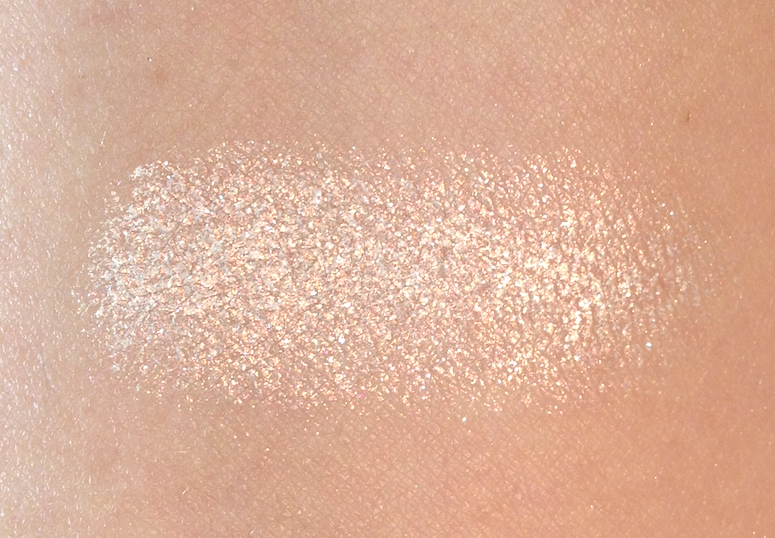 In terms of lasting power, my experience was about average - six hours before I saw significant fading, but no creasing. With a primer, I got an extra couple of hours. The best performance overall - including intensity - was over a Color Tattoo base.

So would I buy this palette again? Probably not. It's a workable palette, but hardly a slam-dunk when almost half the shades are problematic in some way. The overall mix is also not as versatile as I'd like, despite those lovely metallics and the funky duochrome. Too many of the shades blend into one wash of taupe-beige for my preference.

That said, if you 1) really prefer a softer, natural eye look, 2) aren't looking for a ton of variety, but like the option of a metallic smoky and 3) have a limited budget, then this might be something to check out. (Though I'd probably steer you to the Coastal Scents Revealed palette first, or the trios from Wet'n'Wild.)

Here is an example of the very natural, truly nude look that comes from the less pigmented side of this palette. (I used the peach on the lid, a mix of the taupes in the crease and outer corner, a mix of the taupe shimmer and pink shimmer under the lower lashine, the dark brown as eyeliner and the duochrome shimmer very lightly as highlight.) 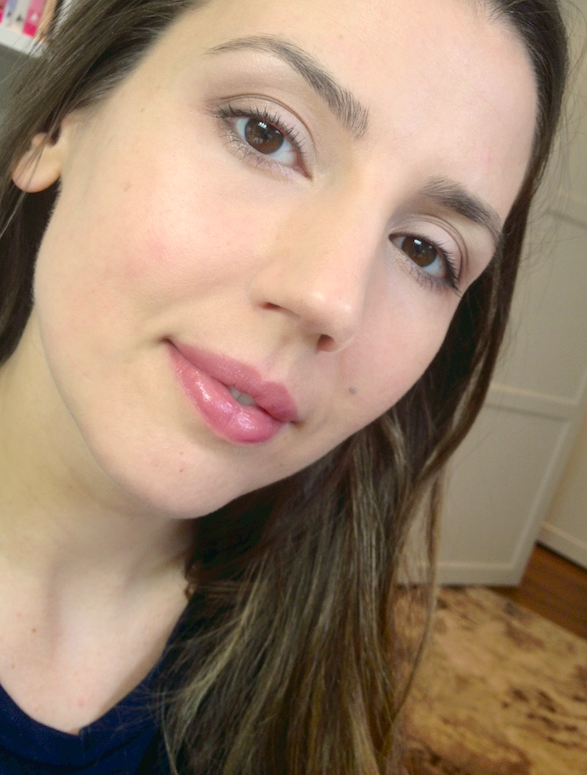 Availability: Most drugstores now, prices vary but the cheapest I saw were at Wal-Mart for about 10$, with Pharmaprix/Shoppers retailing them for 14-15$.

(I purchased this palette at Pharmaprix. Not sponsored, opinions are my own.)