To paraphrase the guy, sometimes a gimmick is just a gimmick.

Benefit is a brand I generally enjoy. I'm a fan of their boxed blushes, their eyeshadows and their foundation, and I usually find their faux-vintage vibe very appealing. They've come up with innovative products that really stand out as iconic - their liquid blushes, for example - and are the masters of the uber-cute sampler sets.

Which is why I so wanted the They'reReal! Push-Up Liner to be everything it promised. I mean, a cream liner formula in a convenient pen format that would make it foolproof to achieve a precise, lash-hugging line? A flexible, angled dispensing tip that would facilitate a neat wing? I was ready and willing to be converted, and doubly delighted when a deluxe preview sample of the liner found its way into my Sephora bag. 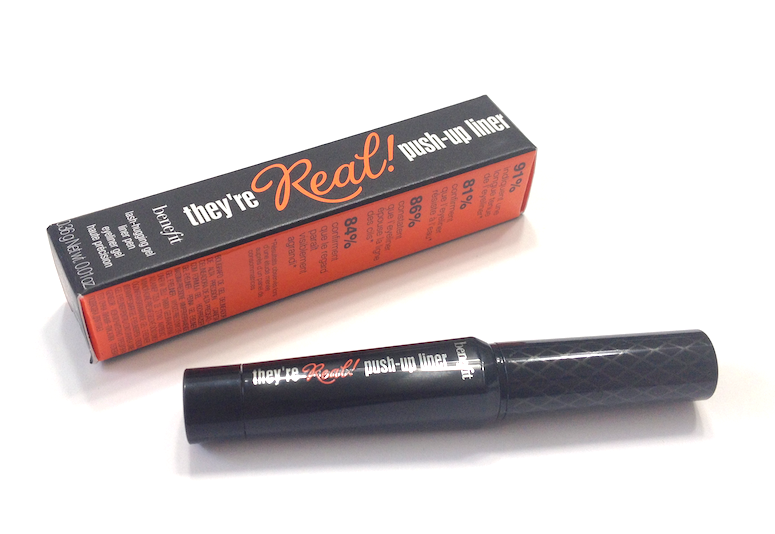 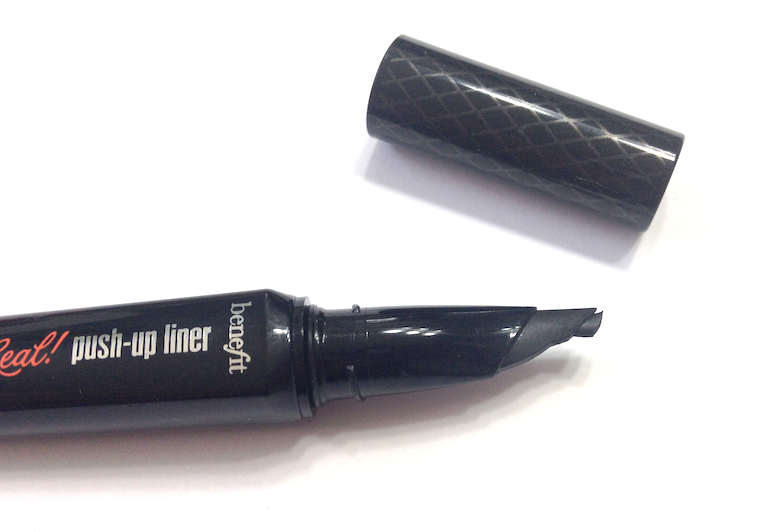 I'll start with the positives, because there are indeed some really strong points here.

The actual formula is an incredibly pigmented, matte black. It goes on rich and velvety, and it wears like iron. It is waterproof, rub-proof, and generally ready to have a tangle with anything you throw at it. It's one of the only things that wears well on my waterline. (And despite reviews claiming that the only thing that gets it off is the They'reReal! Remover, I had no issues getting it off with a Bioderma-soaked cotton pad, pressed to the eye for 10 seconds and gently wiped away.)

Conceptually, the pen idea is also quite brilliant. It turns the usually cumbersome cream liner and brush duo into something that can be tucked away in a purse, perfect for adding some drama for a post-work cinq à sept. It's also a neat option for travel. The angled silicone tip is also great for precise lining, though still too thick for creating a really sharp point on a wing.

So if the formula is nice and the applicator is great, what's the issue? Simply put - they shouldn't be together. The product inevitably smears over the side and tip of the applicator as you use it, creating balled up product that needs to be wiped off or risk a gunky line. I tried eking out as little as possible, but that made the application patchy, as there was not enough product to work with, leading to skipping and weird "fraying" at the edge of the line. This required going over it a few times, which actually ended up being more of a problem, as the formula dries incredibly quickly - and the result was more crumbling.


You can see in the picture below that there is some patchiness evident in the inner corner, where I tried to use less product, and then again some of that on the wing and along the top edge where I tried to go over areas that had crumbled. The point is also not as sharp as I'd like it to be. From a distance it's probably fine, but close up it's just not the clean, flawless line I can usually get.

On the other hand, it's a nice, deep black, and it's kind of incredible for tightlining the waterline (if you click on the picture you can see in full size). That said, I would still need to follow up with a brush to get some of that black into the base of my lashes to get rid of any visible skin, as the silicone tip doesn't let me do that.

And then there's just the sheer amount of product trashed, as it crumbles around and needs to be wiped off the tip. Considering that there's only 0.04 ounces (for 29$ CAD) compared to, for example, 0.17 ounces for a pot of Clinique Cream liner (at 17$ CAD), the waste is extra outrageous.

The formula, for this kind of application, really needs to be a little softer, but then I have to wonder if that would make the silicone tip problematic, as it would likely cut though the product it was setting down? I also assume that the quick dry time is also due to whatever it is that makes it so hardy, which is a point in its favour, at least for me.

I think if you're good at working with liner already and you want something tidy to carry and that will wear well, then you'll probably be able to forgive the application woes in favour of the indestructible formula and convenience. Personally, the time and energy (and wasted product) needed to achieve the same cat-eye effect I can get with a brush and a pot of my favourite cream liner just doesn't balance out. (And if you're a lining novice looking to execute a perfect wing, I would recommend starting out with a liquid pen liner. Same concept, but with a better applicator/formula match.)

That said, I do like this a lot for using in my waterline, and for that alone I might consider purchasing it.

Have you guys tried this yet? What do you think of it? (Tracy, I know you love it ever so much. :P)

(This was a gift with purchase at Sephora, and you can use code PUSHUP to get one if you place an order for 25$ USD/35$ CAD.)