I'm a sucker for chubby pencils, be it for eyes or lips, so I was really really happy to get some of the Cover Girl Flamed Out Shadow Pencils in my sample bag from the Beauty United event (which I wrote about here, if you're curious).

When I initially tried the two shades in the picture above, I was surprised that they had some significant differences in finish and pigmentation, so I got a few more to test the range more thoroughly.

After seeing the beautiful burgundy eye that was created on the model for the event, I tested these out in a variety of ways: as liner, different shades blended out together as cream eyeshadow, as a base under powder eyeshadow. Overall, I found that I liked these best used in the latter two ways. Used as liner, I noticed some smudging throughout the day, which I did not notice when blended or used as bases. Used the latter way, they were tenacious, especially when a powder product was layered over them. They were generally - with one exception - ok to blend out before they set, though not as easy as some other chubby pencils I've tried that had a softer, slippier consistency.

I mentioned above that I noticed some differences between the two pencils I initially received, and I found that to be the case throughout. That's good and bad, depending on how much you like variety compared to surprises. I like that there is a range of finishes, but since there is no way of knowing what you'll get unless the store you shop at happens to have testers of all the shades, it can be problematic if you buy another shade based on your feelings about a previous one. There really should be an indication on the pencil somewhere.

Red-Hot Flame is a creamy, deeply pigmented russet red with a faint metallic sheen, and a soft texture that applies and blends easily. This was my favourite out of the bunch for both performance and colour. It looks scary in the swatch, and you can definitely create a major statement eye (as per the look created for the Hunger Games District 8 feature). However, it's also a great shade to layer under gold, bronze and cabernet eyeshadows to create a burnished smoky eye.

Gold Flame is sheerer, with some shimmer, and works very well to add in some dimension and highlight. I liked it best when used over a shade like Red-Hot Flame for an extra kick.

Crystal Flame is like Gold Flame, and is perfect for adding a gleam to the inner corner.

Melted Caramel Flame sits somewhere in between Red-Hot and Gold Flame - not quite as creamy, soft and intense as the former, not quite as sheer and shimmery as the latter. It's a nice all-over lid shade, though because it has a firmer texture, it's more difficult to blend out. I like the look it gave when I used it to line under my eyes, but again, it smudged a bit when not set with powder.

Silver Flame is the sheerest, with bigger shimmer - almost glitter - and the patchiest application, and it was hard to blend out. My least favourite, based on performance alone.

These also need to be sharpened, which can be a pro or con, depending on whether you prefer convenience and less waste versus getting a smaller, sharper point. 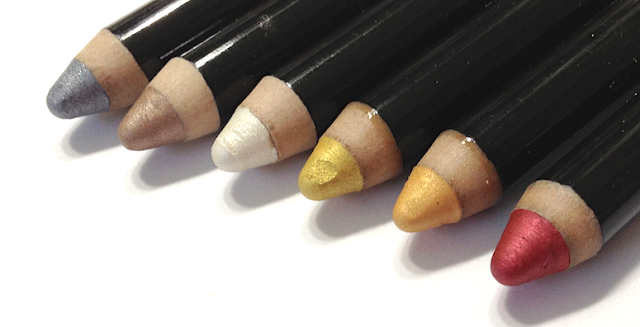 Availability: At most drugstores, price can vary between 6$ to 8$.

Pros: Generally good to great wear when blended out, and especially she set with powder. Good range of shades and finishes (which could be a con as well!). Fantastic pigmentation on the cream liners (Red-Hot Flame and Lime Green Flame). Nice base product, especially the creamy shades.

Cons: Finish and pigmentation varies between shades, and is not indicated as such on the packaging, which is really confusing. Blendability varies between shades (Silver Flame being the worst), but generally have less slip and softness than comparable pencils from the drugstore.

(Disclosure: I am a #BeautyUnited blogger. As part of my affiliation with this group, I receive products and special access to P&G events. The opinions on this blog are my own.)