NOTE: I've had to amend this review after continued use over different primers and bases, as that altered the wear and payoff more than usual.

The Shadow Play Quads are currently offered in four versions, though the Wal-Mart I went to only had two of them in stock. (Seriously, the display was pillaged. The only items that they had in any kind of reasonable quantity were the lipsticks.) I opted to try the cool-toned neutral quad, called Smoke and Mirrors. 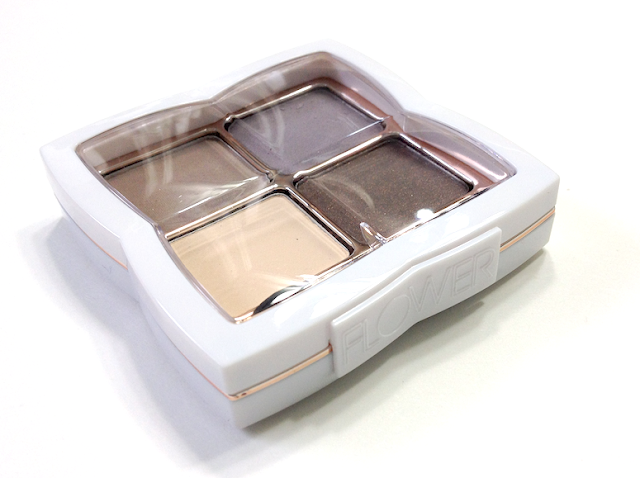 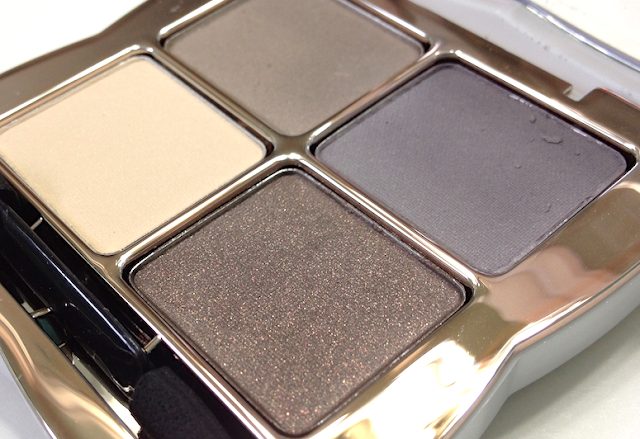 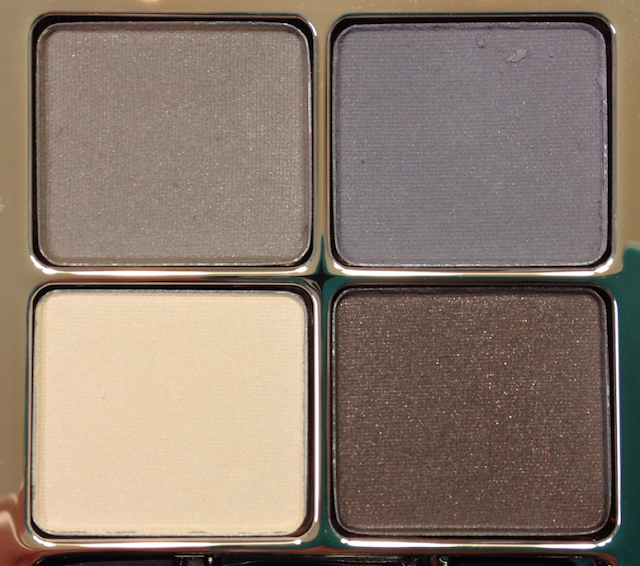 The cream shade is by far the most problematic - sheer, powdery, thinner textured, it makes for an ok base or subtle browbone highlight, but otherwise it's altogether unimpressive. The other shades are generally better.

The dove-wing light brown in the top left is nicely pigmented, with a dense, smooth texture that is unusual for mattes, let alone drugstore mattes. It's a good blending or crease shade. The greyed plum in the top right has an equally lovely texture, though it is less pigmented. The gold-flecked medium brown at the bottom right is on par with the dove brown in terms of texture and payoff, though it loses all those pretty flecks once you start working it. Which could be a good or bad thing, depending on your preference.

This is an easy palette for a soft, neutral, work-appropriate eye, though you might be better off using a different eyeshadow to sub in for the cream. Over a primer, all the shades wore 6-8 hours with little fading, and no creasing. One thing to keep in mind is that the texture is quite soft, so these will kick up tons of debris if you use a stiffer brush or a heavier hand, and they are best over a primer as they are so soft and therefore don't bind too well. They actually remind me a lot of the Inglot mattes in terms of how they feel to the touch, though their performance is not comparable.

EDIT: I originally tested these with a stickier primer - a cream eyeshadow. Over a primer that has a drier finish, I found that they had a harder time binding and blended out too easily, which could work for a very diffused effect, but could also look muddy and indistinct. On bare skin, the effect was even more pronounced, and they dusted off very easily. These are best patted on over a sticky, creamy base and gently blended. The diffusing effect and easy blendability works best for the dove brown, which is beautiful as a natural contour when applied with a fluffy brush into the crease.

Availability: Only at Wal-Mart, and in select US locations for the moment. Price is 9.98$ USD.

Pros: Dense, smooth texture that is very blendable, and good pigmentation over primer.

Cons: Powder fallout requires care in application. The cream shade is particularly disappointing in both texture and payoff. EDIT: Depending on the primer, the overall blending can be tricky, as the shades diffuse easily and can look muddy and faded. Double that for bare skin.

(I purchased this item at Wal-Mart.)