I first encountered Becca as a brand at The Makeup Show a couple of years ago. The line had immediate appeal - a natural but polished aesthetic, focus on healthy, glowing skin and some of the sweetest people manning both the booth and the company. My budget at the time didn't stretch beyond a small sampling of their wares (a lipgloss), but I walked away with the the intention of getting some more items as soon as I could.

"As soon as I could" stretched until fairly recently, unfortunately. I heard that their UK distribution was closing down, and I thought that was a shame, as this is a brand that deserves more attention. Not everything they do is perfection (it seems like their eyeshadows have been hit-and-miss from what I've read) but they do excel at face products, which is what I splurged on when I placed my order. I ordered the Radiant Skin Satin-Finish Foundation in Buff, the Shimmering Skin Perfector in Opal (and received a sample of the same in Topaz), and a couple of their renowned Beach Tints (which will be reviewed separately).

I originally planned on purchasing the Luminous Skin Foundation, which is what they are famous for, but it has the coverage level of a tinted moisturizer, which I wasn't really feeling at the time. Radiant Skin purports to have "medium buildable coverage" and a "lightweight radiant finish", which all sounded aces to me.

Picking out a foundation colour online is always a delight, but Becca did make it easy with good descriptions and swatches on the Sephora site, and a foundation finder on their own site. I went with Buff, which is just a touch too yellow-toned for me (more so in the swatch below than when actually applied) but otherwise very workable.

Part of what makes it workable is that this is not exactly a medium coverage foundation. I would say light at one coat, medium at two. You can build it without it looking cakey, but you need to do so carefully. I found I had the best results with a flat-type foundation brush, particularly the Contour Brush from Glamcor, which maximizes the coverage without leaving behind any streaking. When I used my favourite buffing brushes, the foundation picked up too much on skin texture and had a hard time applying smoothy.

The finish is interesting - it does indeed possess a radiant glow, yet unlike many satin-finish foundations, I found it dries very quickly and almost matte at first. It needs about thirty minutes to settle into the skin to achieve that luminosity, and continues looking more and more like skin as the day progressed. It doesn't settle into pores or move around, though for that first half hour it does pick up surface dryness. It lasts relatively well, with some breakdown around the corners of my nose at the 7-8 hour mark. (For what it's worth, my skin at the moment is combo/normal to dry, with visible pores on and around my nose.)

Now as for the Shimmering Skin Perfector - well, this is the be-all-end-all product in their range, to hear it told. It has achieved a certain cult status thanks in part to the exposure it received on the Pixiwoo YouTube channel. And after testing it, I have to agree with the accolades.

I debated between Pearl (which is more white-based) and Opal (which has a golden-peach hue) and opted for the latter because I tend to favour warming highlights. And it is beautiful. While it appears alarmingly opaque when first pumped out, it sheers out to the perfect shimmer, reflective and dewy, not sparkly. The peachy undertone isn't perceptible on my skin, it just allows the shimmer to blend in without looking stark.

It can be used straight to add a more focused shimmer, or it can be mixed into a foundation to add all-over glow. I would be very light-handed with the latter, because while this is a very refined shimmer, it does still pack a punch. You may end looking a little more Studio 54 than planned.

I didn't have a chance to wear Topaz, so I can't comment on it, though I imagine it would look fantastic on deeper skin tones than mine.

One caveat I have is that the pump bottle is sleek and elegant, but it pumps out more product than you probably need at one time. I also don't see the point of having an SPF in something that tends to be used in spots rather than all over.


And in keeping with my New Year's Resolutions, I wanted to add something to the review format. Instead of just swatches, a quick before-and-after application. 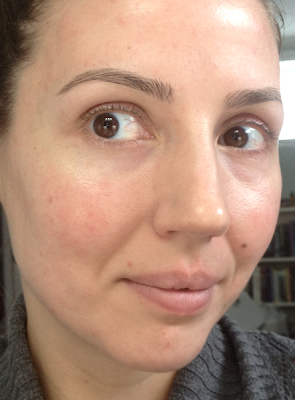 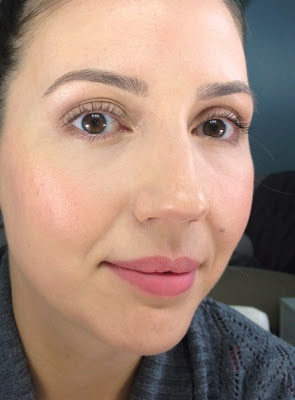 I kept this makeup very simple, mostly to demonstrate the two products reviewed.

Embryolisse Lait-Creme used as a moisturizer/primer.

I applied and blended the Radiant Skin Foundation with a Glamcor Contour Brush (which is best for achieving stronger coverage without the "stroke" marks of a tradition flat foundation brush), going over some areas with a dab more. I went without concealer to show the level of coverage. I did not apply powder.

For the blush, I used a Real Techniques Contour Brush to apply Becca Beach Tint in Watermelon (and applied the same to my lips using my pinkie). I applied the Shimmering Skin Perfector in Opal to my browbone and the tops of my cheekbones with the Real Techniques Setting Brush.

For my eyes, I applied Burberry Trench all over the lid as a base using a MAC 239, and Burberry Midnight Brown very softly through my crease using an Inglot 6SS Crease Brush, and under my lower lash line using the MAC 239. For lashes, I used one coat of the Buxom Lash Mascara. 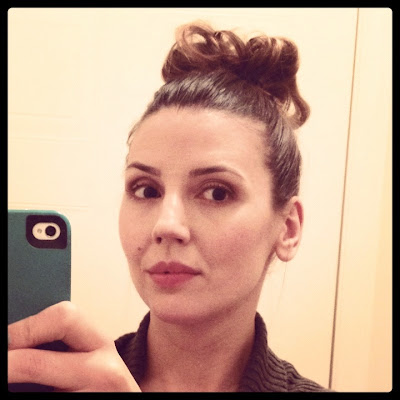 And for fun, the look under an Instagram filter, feeling all Monica Vitti.

Availability: The Radiant Skin Foundation is priced at 42$ USD on www.beccacosmetics.com, and 51$ CAD at www.sephora.com. The Shimmering Skin Perfector is 41$ USD and 50$ CAD at those same sites.

Pros: Radiant Skin is dewy, light-feeling, ideal for skin that doesn't need a ton of coverage but needs some extra luminosity. Shimmering Skin Perfector is concentrated glow in a bottle, sheerable to the most natural, healthy-skin effect.

Cons: The foundation does take a bit of time to settle, during which time it can pick up on dry texture. It is more light than medium in initial coverage, has to be built up with care. The only downside to the Perfector is the over-generous pump.

What do you guys think? Have you tried any Becca products? Are you, like me, hoping they continue to be a presence on the beauty scene?